"The Road Not Taken" by Robert Frost

I had just turned thirteen years old when I watched and listened to a white haired man speak during the inauguration of John F. Kennedy.  The speaker was Robert Frost. The inauguration was on January 20, 1961 and on one of the coldest January days in recorded history.  Frost became the first poet to read in the program of a presidential inauguration.

One of my favorite poems is not the one spoken on that historical day, but one I would latter be introduced to in an English literature class.  The name of the poem is, "The Road not Taken". 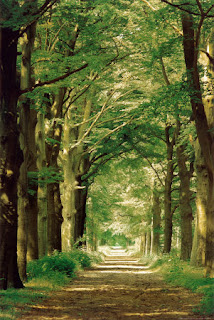 Two roads diverged in a yellow wood,
And sorry I could not travel both
And be one traveler, long I stood
And looked down one as far as I could
To where it bent in the undergrowth;
Then took the other, as just as fair,
And having perhaps the better claim
Because it was grassy and wanted wear,
Though as for that the passing there
Had worn them really about the same,
And both that morning equally lay
In leaves no step had trodden black.
Oh, I marked the first for another day!
Yet knowing how way leads on to way
I doubted if I should ever come back.
I shall be telling this with a sigh
Somewhere ages and ages hence:
Two roads diverged in a wood, and I,
I took the one less traveled by,
And that has made all the difference.
Robert Frost﻿
~
Frost is telling us not to follow the pack, but to look within, and to become the path finder.  He is saying not to always travel the path that has been pave over by those who have been there before us.  If you have a choice, he says, take the road less traveled by and it will make all the difference.  In other words, trust yourself.  Listen to your intuition and understand what they mean when they say, "Talking to God is prayer, but God talking to you is intuition.  Follow it, regardless of who has been there before .  Listen to your heart.
Posted by TaylorMadeIn48 at Thursday, July 28, 2011

The Elephants of Samburu - Please Mute Blog Music Before Viewing.

The Snowy Owls - Mute Music Prior to Watching Video

Visit msnbc.com for breaking news, world news, and news about the economy

As the creator of this Blog, all quotations and artistic images within this weblog are intended to be used under a policy of personal use and not for profit. The use of any Trademark or Copyrighted material is not intended to infringe copyright. If you see anything on this weblog that has not been properly attributed to its creator please advise me and I will immediately rectify its use. If a documented copyright owner so requests, their material will be removed from published display, although the Author reserves the right to provide linkage to that material or to a source for that material.

This website may, at times, present copyrighted material, the use of which might not always have been specifically authorized by the copyright owner. Such material is made available in an effort to advance understandings of democratic, ecomomic, environmental, human rights, political, scientific, and social justice issues, amoung others. The author believes that this constitutes a "fair use" of any such copyrighted material as provided for in section 107 of the U.S. Copyright Law. In accordance with Title 17 U.S.C. Section 107. The articles published on my website are distruibuted without profit for research and educational purposes.